Coat and boots star as a Columbia professor

I don’t know how they do it! Those creative Hollywood types manage to get a beige coat and knee-high boots to play a Columbia professor:

If I were the cynical type, I might think that sentence is a tad misleading. And full of errors. Fact is, Julianne Moore plays the professor; the coat and boots don’t even have a speaking part in the movie. The boots are actually knee-high and the coat and boots give Julianne her academic look.

To make that sentence somewhat intelligible, you have to get rid of the misplaced modifier (that’s the phrase at the beginning of the sentence) by moving the word it modifies:

Playing a Columbia professor who is diagnosed with early onset Alzheimer’s disease, Julianne gets her academic look from the beige coat and knee-high boots.

How many goofs can you find in this excerpt of an article on Yahoo! DIY? 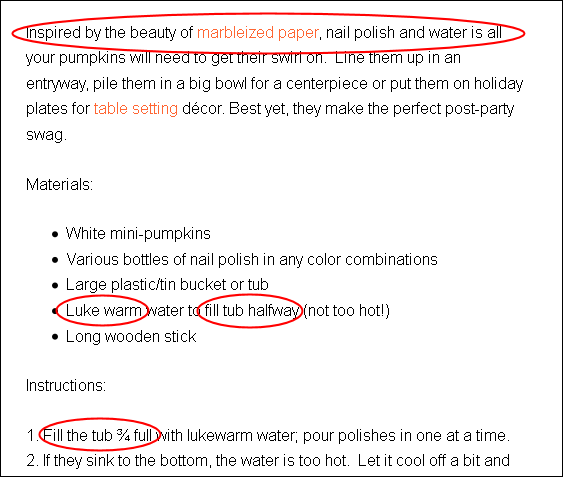 There’s the misspelled lukewarm (it’s one word, not two), and the instruction to fill the tub halfway. But in the first numbered instruction, she tells us to fill it 3/4 full. Someone is a little confused and that would be the writer. And the reader.

I read this so you don’t have to

I read Yahoo! Style so you don’t have to. And I report on just the worst of the many gaffes committed by Yahoo!’s writers. And these excerpts from a single article are some of the worst.

It starts with the misspelled America Ferrera and goes on to a couple of repeated words. The movie title gets no special treatment (which is usually italics or quotation marks at Yahoo!, there being no company standard). There’s an expression the writer misuses; it tripped her up. (Apparently she didn’t know it’s not the same as simply tripping.) What kind of nut was involved in this story? Beats me. It’s not OK not to capitalize OK; and it’s not OK to capitalize goddess:

I thought I was reading a story about Kim Kardashian, who was nearly trampled in a crowd. But (or nut?) it was a security guard who was nearly the victim. (The other victim is the reader of this piece, where the misplaced modifier produces unlikely results.) You’d think that a professional writing about style and fashion would know how to spell Rosie Huntington-Whiteley’s name, but you would be wrong: 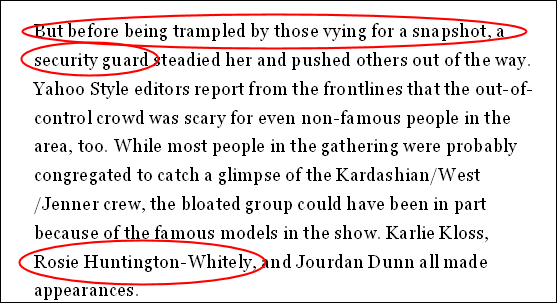 During the fashion show, the front row was set to a soundtrack. I guess that’s better than being set on fire, but not as good as a show set to a soundtrack. Anyhoo, it hardly matters since the music included a song that the writer claims is “Stop Pressuring Me.” There is no song by that name. However there is a tune with the lyric “stop pressuring me” and it’s called “Scream.” Then there’s a teensy word missing, but that’s really not important in light of the other embarrassments:

I read this stuff so you don’t have to. You’re welcome.

It’s a zoo out there

This article on Yahoo! Travel may be about the best zoos in the United States, but it represents some of the worst travel writing on the Internet. It’s shocking the number of mistakes made by someone who is a “managing editor” and an experienced travel writer.

This is how bad it can get:

It’s not an orange-colored, artificially flavored breakfast drink. It’s an orangutan. And the zoo calls it the Stingray Beach, with a capital B.

How did she screw this up so badly? The zoo is the Saint Louis Zoo and it’s in St. Louis, Missouri. Don’t go on a Saturday or Sunday expecting to see a concert. Although the writer claims concerts occur every weekend, they really occur only on Fridays and only between May 23 and August 29. Then there’s the case of the subject (admission) and its verb (which the writer thinks should be are):

I was expecting that if I went to this zoo, I’d be able to do more than just see the wolf cubs. Maybe I could bottle-feed them. Or dress them in coats and ties.

How does a travel writer writing about zoos get another zoo’s name wrong? It’s Riverbanks Zoo and Garden (it’s not Zoos and it’s not Botanical):

OK, so maybe someone will explain to me how this project will create a new grizzly bear:

Would you trust the information in this article?

What’s going on at Yahoo?

There’s something really weird going on at yahoo.com. The number of bone-headed mistakes on that page has exploded. Is it a new writing staff? A bunch of interns hired for the summer? Outsourcing to a non-English-speaking country? Here’s just some of the things spotted on today’s Yahoo! front page.

If the marathon you’re writing about is in Boston, it’s the Boston Marathon (with a big M). That’s not the only thing I’d quibble about, though. I can’t say I agree with the statement that “retrievers are used to distract” people. There are many, many documented benefits to petting a dog, including lowering blood pressure:

Here’s a use of chide that’s new to me: It’s used as a transitive verb (meaning it has a direct object, in this case decision), so it means “to reprimand or scold mildly.” I don’t think anyone was chiding the decision — the person who made the decision, maybe was chided.

Ah, the old subject-verb disagreement. There can’t be any disagreement that the subject is tenor and the verb should be is. Also, there’s that dangling modifier at the beginning of the sentence, which appears to modify tenor (which makes no sense), though it likely should modify the writing on the boat:

OK, here’s a mystery for you: What was Iran stockpiling? Government cheese? This doesn’t contain a grammatical or spelling error. This is what is known as an error of omission: It tells you nothing. 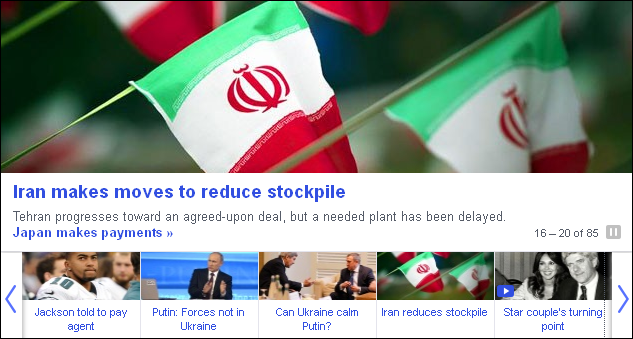 I almost spit out my sugar-free, nonfat vanilla latte when I read this:

The name of that café is a mouthful, n’est-ce pas? The hilarity continues when you realize that the poor French-challenged writer has mashed up Café de Flore and Les Deux Magots.

Here’s one you can disagree with, but according to the American Heritage Dictionary, the preferred spelling in the U.S. is disk:

And we’re back to that old bugaboo — matching a subject (series) with its verb (hint: it shouldn’t be show):

Finally, there’s another preferred spelling: light-years (with a hyphen):

Whew! That’s all for now. And by that I mean, I’m going to go get two Advils and lie down.

Is your writing bulletproof?

Is your writing bulletproof and impervious to criticism? If you’re a writer for yahoo.com, the answer is probably “Heck no!” You probably didn’t notice when you wrote this that you implied that armed men were from a chapel and that a church spoke:

You might want to reconsider the placement of those prepositional phrases.

Boston’s City Hall Plaza, which was unveiled Friday, featured a tribute to Celtics legend Bill Russell. At least that’s what it says on Yahoo! Sports:

Why would you think that?

Why did the writer for Yahoo! Movies think this is a question?

Was it the same Yahoo! Movies writer who thought this made sense?

Was it the same Yahoo! Movies scribe responsible for this?

Was it the same Yahoo! Movies writer who would have us believe that Sophie Nelisse is based on some bestseller?

I’m embarrassed for this writer

Sometimes there are so many egregious errors in a single module on the Yahoo! front page that I am actually embarrassed for the writer (and the editor, if there was one). This is one of those times:

The misspelled Millennials first caught my eye. Then it was the uncapitalized mom and dad that made me shudder. (If the writer had used “their mom and dad,” the lowercase letters would be correct.) And finally the misplaced phrase “the highest rate …” which makes no sense where it is. Awkward!

How droopy is your jaw?

Why is it so difficult for Yahoo!’s writers to spell Comic-Con with a hyphen? It seems easy enough, doesn’t it? But this headline on Yahoo! Movies proves otherwise:

The headline promising five “surprises” and the first paragraph promises seven “favorite things.” So, there’s a bit of confusion, although the writer put the hyphen in Comic-Con — this time:

It was too good to last. Again, the writer dropped a hyphen. Maybe his brain was affected by that drooping jaw:

Does the writer have any other jaw-droppingly dumb things to share? Of course!

No article from Yahoo! Movies would be complete without at least one misspelled celeb name. This time we get two: Bryan Cranston and Chris Hardwick. I’m guessin’ that Mr. Cranston, and not Mr. Harwick (or Hardwick), is  starring in an upcoming film. But that’s not what that sentence tells us. (Oh, by the way, that was the fifth and last “surprise” from Comic-Con. Maybe the headline writer can count.)