Make over that headline

What do the editors at Yahoo! Makers make? Mistakes! This headline needs a make over to change the noun makeover to the phrasal verb make over:

Time to make over your makeover

If you’re writing about a makeover, it’s a noun and it’s one word. If you’re telling folks how to make over a patio, then it’s a verb and it’s two words. If you’re reading Yahoo! Shine, you’re probably wishing the writer made over this caption:

Make over that headline

The crackerjack editors and proofreaders at Yahoo! Shine need to make over this headline:

Makeover is a noun, the verb is two words.

Mr. Gunn is a spokesperson for Tide, but he’s not the only one. The writer (who so modestly refers to herself in the royal “we”) also shills for the detergent when she isn’t taking time to make over the English language:

Here’s a novel spelling of vice versa and the somewhat lesser offense of a missing hyphen in the compound adjective loose-fitting:

This mistake is so common (especially on Yahoo!), that I almost expect it:

The writer, who specializes in fashion and beauty, should know how to spell waistband:

What should we make of this little question?

and another missing hyphen:

and can’t proofread her own writing:

Spell-checker? She don’t need no stinkin’ spell-checker. She doesn’t care how the hell you spell separation and putting in an apostrophe where it belongs:

Time to make over the makeover

It’s about time that the editors for Yahoo! Shine understood the difference between makeover (a noun) and make over (a verb): 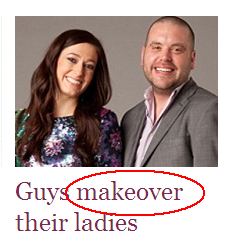 1 way to make over your writing

One way to make over your writing is to learn the difference between a verb and a noun.

Thanks, Yahoo! Shine, for illustrating what not to do.

How to make over your writing

There’s an easy, fun way to make over your writing. Start by learning the difference between a noun (oh, like, say makeover) and a verb (like maybe make over). Then ignore any examples of writing you might find on Yahoo! Shine:

The home page of a Web site is like a front door. It can entice visitors to continue on or it can make then turn around and go elsewhere. If the page is filled with errors, it’s like a giant Welcome mat. Except instead of saying “Welcome” it says “Scram!”

So, what’s the message a reader gets when landing on the Yahoo! Shine home page? It starts with grammatical errors, where the plural subject doesn’t match the singular verb:

and continues with the misuse of a noun as a verb (it should be make over):

Goofy formatting and repetition are indicators that maybe there’s typographical evil lurking beyond:

Huge typo! How did the editor miss this and what else did she overlook?

This teaser begs the question: Is this season of “Top Chef” one of the best? Or the very worst? And where are those quotation marks that are needed to indicate there’s a TV program in there?

Is the writer of this headline into the trendy use of lowercase letters for acronyms like BBQ? Or is she having problems with the Shift key?

Enough! The number of goofs is enough to make any reader think the site was written by careless third-graders. It doesn’t say “Welcome.” It’s more like “Enter at Your Own Risk.”

Makeovers seem to be all the rage these days. And nowhere are they more popular than on Yahoo! Shine, where they’re so popular that the editors think anything is a makeover, even when it should be make over:

But it’s really the writer of this article in “Real-Life Makeover” that needs a makeover. It might start with an explanation of the use of the hyphen to create a compound adjective so the reader knows that she’s writing about a mom who’s very energetic and not one who is super and energetic:

The makeover could be, like, real. Just as the writer made over the name of the “Real-Life Makeover” feature.

A little lesson in the use of an apostrophe in a possessive and the need for a capital letter in V-neck tees would also be useful:

Make over your headline — again

It’s a really mystery to me how Yahoo! Shine‘s editors can continue to make the same mistake on. It’s not that hard: Makeover is a noun; make over is a verb. And this is wrong:

While you’re at it, you might try changing the verb look to looks so that it agrees with the subject of the sentence, which is bouquet, not flowers: