If only there were a picture…

If only there was a way the writer for Yahoo! News could see the name of the subject he’s writing about. Like a picture or something so that when he wrote the caption, he’d be sure to spell Luq Mughal’s name correctly:

Going through a phase

What does it take to “phase” a bison? I have no idea, but I was fazed by this word usage by a “journalist” at Yahoo! News:

You don’t really need to know

Don’t you get insulted when a writer “talks down” to you? I know I do! I hate it when a writer uses a vocabulary that is so unsophisticated that even a rhesus monkey could understand it. I lose patience when the simplest terms are explained in excruciating detail. I can’t stand it when the writer has to torture the language just so it’s grammatically correct.

If you’re like me, then you’ll enjoy reading this article on Yahoo! News! This writer is so sure that you’re a member in good standing of Mensa that he doesn’t bother to insure that pronouns have actual antecedents (even if he knew what an antecedent was):

He knows you don’t care if he drops the hyphen from the name of a newspaper. (It’s the Press-Citizen, but who really cares?) When you read that 2 AM is in the morning, you know he didn’t include that redundancy for you:

It’s not often that you read something by a professional writer that contains a grammatical gaffe like the incorrect past tense of a common verb. OK, so it is often, if you’re reading an article by a Yahoo! employee and the article reads like the writer had drunk one too many Bud Lights:

But that’s OK! It’s just a verb and you knew what he meant, right? And the missing hyphen (again) in Press-Citizen is no biggie. And you don’t have to know what PBT stands for, unless you’re a serious alcoholic, then you already know it’s short for preliminary breath test.

Wouldn’t you want to read about Chad Harvey while enjoying a helpful picture of someone named Matt Harvey? I know I would. Perhaps Matt Harvey is Chad Harvey’s brother. Or father. Or uncle. Or next-door neighbor, who looks enough like Chad to stand in for him in the article:

The writer has enough confidence in your mental acuity that he doesn’t have to tell you what a BAC is. Heck, he doesn’t even have to form its plural correctly; he’s sure you won’t mind if he throws an apostrophe in there. (By the way, for you Mennonites and others who shun alcohol, BAC stands for blood alcohol content. Or Bank of America Corp.)

Finally, when you think things couldn’t get worse, the writer does not disappoint:

to have survived not only driving while intoxicated, but also the punishment they inflicted on their bodies.

to not only survive driving while intoxicated, but also survive the punishment they inflicted on their bodies.

But writing grammatically correct sentences is just patronizing your readers.

This is the news?

This is the news, according to Yahoo! News, where correct grammar, punctuation, and spelling are strictly optional.

This is what the editors believe is correct: Capitalizing mom, even when it’s not a substitute for the woman’s name:

Here’s a hint: Don’t capitalize mother, father, mom, or dad unless you can substitute the person’s name and have a grammatically correct sentence. That means if the word is preceded by an adjective (even if it’s just an article like a or the), don’t capitalize it.

I don’t understand how this typo passed the scrutiny of Yahoo! News’ crackerjack editors:

How soon we forget. In the new post-Soviet Union era, it seems we’ve forgotten how to capitalize Soviet Union:

There were either multiple bomb attacks or one bomb attack. The conclusion is left to the reader:

That’s one way to get your readers’ attention: Omit the apostrophe in a contraction!

Here’s another way: Omit the apostrophe in a possessive:

What does it take to be a journalist for Yahoo! News? Not much. All you have to be able to do is read something written by someone else and then try to summarize it for the Yahoo! audience.

You don’t need to be able to spell. You can misspell the names of principals, like Vladimir Lenin:

You don’t need to have a grasp of multi-syllable words, like decapitating:

How do you remove a head from a stone head? Isn’t that, like, one head too many?

Fundreds? What’s that? Like, maybe a whimsical hairstyle preferred by Rastafarians? Or shorthand for “f**king hundreds”?

I guess if demo is short for demonstration, then this could make sense to someone who is spelling-impaired:

You could just copy a name from the news article you’re trying to recap, but you don’t have to. You can make up your own spelling of names like Vitali Klitschko:

and his brother Wladimir Klitschko (You can be confident that no one at Yahoo! cares about accuracy, so you can misspell Vitali again.)

What does it take to write for Yahoo! News? Not much.

The fact remains, the writer for Yahoo! News’ “Trending Now” is unfamiliar with common idioms:

You have to admire the persistence of the writers for Yahoo! News. When they make a mistake, they stick with it, even if it’s easily avoided, like the misspelling of Bismarck on the News home page:

Not ones to cower to the nazis who insist on correct spelling, the journalists repeat their version of the capital of North Dakota in a headline:

and in the actual article:

Like I always say, if you can’t be right, at least be consistent.

How religious are they?

While the Supreme Court is deciding if businesses can use religious to deny birth control coverage, readers of Yahoo! News are trying to decide what the hell that means. 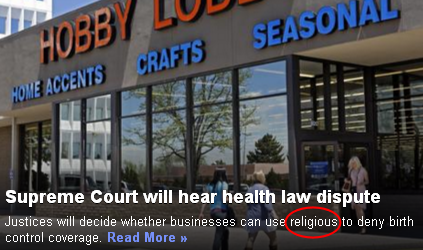 This is the news

What is it about Yahoo! News? Why are the standards for writing soooo low? Why are grammatical errors, typos, misspellings, and worse of all, factual errors, tolerated?

Why do writers working there fail to understand the difference between some homophones, like there and their?

Does this look right to you?

Collecting data from 1.7 cases probably isn’t going to give you statistically significant results. You probably need data from at least 2 cases. Or maybe more like 1.7 million cases. What a difference a missing word makes!

And what a difference an unnecessary word — even a small one — makes to the reader:

When it comes to following the laws of grammar, these writers are felons. They just don’t realize that when placed between two numbers, a hyphen means “to” or “through,” not “and,” which is the word the writer should have used instead of the hyphen:

This is what passes for journalism on Yahoo! News.

This is the news?

It’s amazing what you can find on Yahoo! News. And not in a good way. You’d think that the writers and editors for a site that is allegedly about news would know if socialist is a proper noun or a common one. But noooo:

You’d think that they’d know how to proofread to find extraneous words. But noooo:

And you’d think that a site that’s headquartered in the U.S. would employ folks who knew how to spell U.S. And who knew that Key West is the name of an island in Florida. But noooo: