It’s not short for addvertisement

An advertisement is often called an ad, except on Yahoo! Style:

Let me add one observation: The “super rapey” ad isn’t even an advertisement. It’s a page in a catalog. So, the writer not only got a fact wrong, but also misspelled it. Smart.

What was the writer for yahoo.com really thinking when writing this?

Did the writer have advertisements, a major source of revenue for the Internet giant, on the brain?

It’s not short for addvertisement

If you understand the origin of the word ad, then you should know how to spell it. Here’s a hint to the writer for Yahoo! omg!: It ain’t short for addvertisement:

If I could give advice to this Yahoo! Shine writer, it would be this: Honey, get yourself a competent editor. If your employer won’t spring for one, then just give up on one part of writing: Give up apostrophes. Just don’t use them — ever. You have no idea when to use that little character, so don’t even try.

There are lots of other things about writing that you’re unfamiliar with, too. But start with the apostrophe. Then maybe you can move on to the slash (which functions as a logical or, not an and). See this example here? If you didn’t try to use apostrophes, I wouldn’t call you a grammatical moron for not including one in parents’ and for using it to make ’60s and ’70s plural. All I can think of is how you can’t punctuate, you leave out words, and you think Time Life has a slash in it:

Again with using the apostrophe to form a plural! (It should be moms and ’70s.) You might also consider learning to do a Google search for words like bar mitzvah (it’s not a proper noun) and places like Mount Airy Lodge. While you’re at it, try learning the difference between ad (short for advertisement) and add (a whole ‘nother word). But you got the hyphen right in singer-songwriter. You may not be consistent, but at least half the time you’re right.

If you knew how to do an Internet search, you’d see that the actors are Aidan Quinn and Sam Shepard and that a man is a widower. (A widow is a woman who’s lost her husband.) And, honey, do you need more evidence that you should just stop using apostrophes entirely?

Another misspelling? Why am I not surprised? It’s Christopher Robin:

OK, I admit to being incredibly picky, but there’s a comma missing here:

The character was Steven Keaton on “Family Ties,” a favorite show of mine. Also a favorite of mine? The correct placement of punctuation:

The comma belongs before the closing quotation mark (at least it does in the States), Barbra Streisand’s name is misspelled, and the Bee Gees could use a little space:

So, maybe you need to forget punctuation completely. Just don’t use it. I was going to suggest you also forget trying to spell names correctly, but I see you’ve already done that.

Time Warner removed a Fox Business News ad. The reporter for Yahoo! News‘ “The Cutline” needs to remove this add and replace it with ad:

Some writing is just so mind-numbingly awful that I can’t bring myself to comment on it other than to point out the errors. Such is the case with an article about product placement in movies that appears on Yahoo! Shine.

So, without accompanying explanations, I give you the most egregious of the errors.

There’s a missing word, a misplaced comma, a misspelled “Super Size Me,” a mysterious meta-expirament, a misspelled Steven Spielberg, a missing comma in Reese’s Pieces, and missing quotation marks around the movie title “E.T.”:

There’s a missing a word here, and the name of the journal is Pediatrics:

There’s a f**ked up White Castle, another missing word, and the misuse of it’s instead of its twice:

A misspelling of Rene Russo:

A funky capitalization of the title “Alvin and the Chipmunks” and a missing apostrophe in Campbell’s:

Will Ferrell is misspelled and there’s the use of add for a shortened form of advertisement:

Once again, add instead of ad:

Who is the genius behind this writing? Is this article just an anomaly? If you’re wondering, the writer is a senior features editor whose juvenile style and illiterate musings are most evident in this comment she added to her article:

Your ad is wrong

This is just the wrong way to add to your credibility:

If your spelling is really, really bad, you might think this is right, but you’d be wrong:

Please make her go away. This writer for Yahoo! Shine commits some of the worst offenses against the English language to ever appear on a so-called professionally written Web site.

Can it really be true that she doesn’t know that the Adam in Adam’s apple is a proper noun?

While other writers are off learning how to capitalize band names and punctuation real sentences, this one’s been snoozing at the back of the classroom:

Holy frijole! It’s Aidan Quinn and Sam Shepard! I don’t know how anyone (even one as English-impaired as this writer) could compare Mr. Cetera to a woman who has lost her husband.

(A widow is a woman who has lost her husband; a widower is a man whose wife has died.)

Another creative misspelling?Yup, this is supposed to be Christopher Robin:

The group is Earth, Wind and Fire, complete with comma:

OK, so she doesn’t like putting quotation marks around song titles. I get it. Apparently she also doesn’t like the formatting she’s been using, ’cause she uses a different one here. As if she hasn’t made enough mistakes, she misspells Steven Keaton:

I’m dumbfounded. She’s managed to find another celebrity name to mangle (it should be Barbra Streisand) and another group name (it’s the Bee Gees):

Did she really think that Harry Neilson was a real singer? Did she forget to look above the photo caption at the pic of the album: 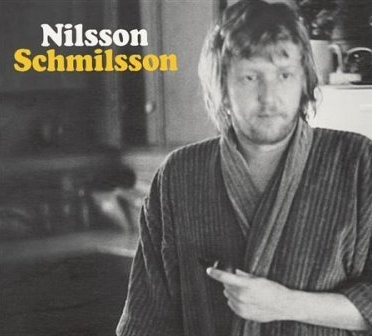 This writer has definitely overstayed her welcome. It’s time for her to go.

The ugly misspelling of Grammy and worldwide is just start of the problems for the Yahoo! Shine writer:

I’m guessing that Avril Lavigne is Canadian and that the writer continues to be clueless regarding punctuation:

Forget about all the punctuation problems (if you can), I want to focus on the funny: the “print add.” Doesn’t she know that ad is short for advertisement? Apparently not:

Here’s that Grammy again; this time it’s got the big G, but its plural is actually Grammys.

The article wouldn’t be complete without a second homophonic error rearing its very ugly head:

Ann Curry isn’t the only one who should be embarrassed

It’s an article about Ann Curry’s recent gaffe at a college commencement, but Ms. Curry isn’t the only one who should be embarrassed. I’m adding the journalist for Yahoo! News to the list of folks who make public missteps.

Usually writers indicate the title of a TV show in some way — by italic or quotation marks — but this writer isn’t quite up on the Yahoo! style. Also, he’s not hip to the spelling of far-flung (it needs a hyphen) and the need to proofread to avoid a repeated word and a hyphen splitting up lighthearted:

This looks good except for the missing verb:

Here’s a homophonic error that I’ve never seen before. It adds insult to Ms. Curry’s injury:

So, whose face is red now?