Reader asks: ‘Where is the question mark?’

Did Trump really rail about money for the WALL? That’s the question Yahoo News asks:

Did he rail or didn’t he rail? Perhaps he just asked the question, “Where is the money for … the WALL?” And perhaps the editors at Yahoo don’t know where a question mark goes when quoting an actual question. Here’s a hint: Before the closing quotation mark.

Readers vow to stand up to errors

In other news, according to Yahoo News, European leaders vow to “stand-up” to Trump:

With a hyphen, stand-up is a variant of standup, which is an adjective (he’s a standup guy) or noun (he’s a comedian who only does standup). As a verb, it’s stand up, without a hyphen and the idiom that means “to confront” is stand up to, also without a hyphen.

What color is the roof of your mouth?

Somehow, the writer for Yahoo Lifestyle managed to see the roofs of the mouths of a “stylish group.” I wonder what a brightly colored palate looks like:

Whose back did Lola Openg want scratched? That’s the question I’m left with when I read this on Yahoo Lifestyle:

The writer alleges that Ms. Openg said, “Scratch her back.” Whose back would that be? In fact Ms. Openg asked Alexa, “Scratch my back.” That’s a bit different, isn’t it? And that illustrates what happens when a writer and editor have no idea what a direct quote is.

Is there a shortage of apostrophes at Yahoo Lifestyle? Or is it just a shortage of editors who know how to use them? Here’s a headline and teaser that has me questioning if Yahoo hires only apostrophe- and spelling-impaired editors:

OK. So that was just a careless mistake (or two or three). The actual article must be better, right? Wrong. Those folks at Yahoo are still apostrophe-impaired, unable to put them in two places in one sentence:

Let’s take the charitable view that this is just a typo and not the result of a writer’s unfamiliarity with a common expression like “fill it up”:

I’d overlook this mistake (just like the writer overlooked the word to before walk), if it were the only goof, but alas, it’s not:

Another apostrophe goes missing here, but maybe it’s just the result of a malfunctioning keyboard:

But, wait! There’s more! After I wrote this post, the headline and teaser were corrected. Somewhat:

It looks like the editors noticed the missing apostrophe and the typo. Good job! Maybe next time they’ll learn to use a spell-checker and proofread before publishing. If not, I may just harass them some more.

The editors at Yahoo News have gone apostrophe-happy. Maybe they think an apostrophe is needed after every plural noun: 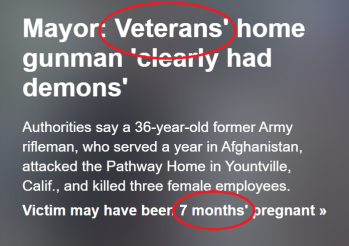 Why they would add an apostrophe to veterans is a mystery to me, especially since the name of the facility is Veterans Home of California (sans apostrophe). But adding an unnecessary apostrophe to what looks like a possessive is a common mistake at Yahoo. A mistake that can be avoided by following this advice from the Associated Press Stylebook:

Do not add an apostrophe to a word ending in s when it is used primarily in a descriptive
sense: citizens band radio, a Cincinnati Reds infielder, a teachers college, a Teamsters request, a writers guide.

Memory Aid: The apostrophe usually is not used if for or by rather than of would be appropriate in the longer
form: a radio band for citizens, a college for teachers, a guide for writers, a request by the Teamsters.

So, in the case of that headline, it’s a home for veterans and therefore, a veterans home.

Even more mystifying is the apostrophe in months. I imagine the editors thought it was like the quasi possessives one year’s salary, two weeks’ notice, or seven years’ experience. It is not. Quasi possessive expressions involve measurement (such as a length of time or amount of money) and a noun. The expression 7 months pregnant includes a length of time and an adjective and there’s just no possessin’ an adjective.

(If you’re trying to figure out if you’re faced with a quasi possessive requiring an apostrophe, take a look at my memory aid here.)

Just call it a holiday

When I read this on the front page of Yahoo Finance, I attributed the inconsistent spelling of the February holiday to carelessness:

But it could just be the result of laziness: The editors at Yahoo didn’t bother to refer to any authorities on how to spell the holiday. But they weren’t so lazy that they couldn’t come up with yet another place to stick an apostrophe:

Nothing makes a newsroom look more dysfunctional than the inability to spell a simple word the same way twice. Case in point: This headline from the home page of Yahoo Finance:

Was this just a simple typo? In an effort to sleuth out the truth, I looked at the article itself. The headline and text in the video are equally confused:

Maybe Yahoo writers should start sharing the same dictionary. Or maybe they should just refer to people you work with as colleagues.

Y’all take a look at this headline; y’all be embarrassed for the yahoo.com editor:

The Southern express y’all is a colloquial contraction of you and all. The misplaced apostrophe in ya’ll makes that a contraction of ya (or you) and will. Y’all got that?