How big was that hanger?

How big a hanger does it take to host an award ceremony? According to Yahoo! Style, the Critics’ Choice Awards was held in Barker Hanger:

The only Barker Hanger I could find looked like this:

A more likely venue is the Barker Hangar, located in Santa Monica, not L.A. It looks something like this: 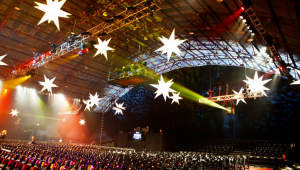 I think that’s what the writer meant. I’m guessin’ that she didn’t even know that hangar was a word and it referred to a large building where aircraft are stored.

Here at Terribly Write headquarters, we’re betting that the “news editor” for Yahoo! Style has no idea that there is a word hangar that is very different from the word hanger. 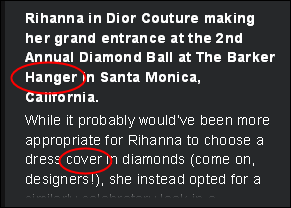 Every time this “editor” has described the venue, she refers to it as a hanger. A hanger is a device for storing clothing in a closet. A building for storing aircraft is a hangar. And that’s where this ball was held — in a converted aircraft hangar. (Oh, I almost forgot: cover should be covered. But I quibble.)

What do you do with an airplane hanger?

If you read this on Yahoo! TV wouldn’t you be asking those questions?

That’s quite an investment!

Investing in hangars, lightweight or otherwise, would require some serious cash:

After all, a hangar is designed to house aircraft. It seems like a rather inordinately large expense for storing clothes. You’d think that the Yahoo! Makers writer would recommend something a little smaller and less costly, like some really good lightweight hangers.

How many pop tops does it take?

How many pop tops from soda cans would you need to cover a hangar? And how would that create more space? That’s what I’m askin’ myself after reading this on Yahoo! DIY:

This is a hangar; it houses aircraft:

This is a hanger; it holds clothes:

Which item do you think the writer meant?

If you can’t be right, at least be consistent

That seems to be the motto of the writer for Yahoo! DIY who clings to the mistaken notion that a hangar is something you hang in your closet:

It is not. A hangar is something a plane hangs out in. But at least this gal is consistent:

… and maybe a bit stubborn. Here it is one more time:

The writer probably doesn’t think that spelling matters nowadays. Judging from the comments left for the article, I’d say she was wrong:

“For those who write these articles, PLEASE, check your spelling and verbiage.”

“Hanger – for clothes. Hangar – for airplanes”

“All the misused ‘hangars’ is very distracting. We’re not talking about organizing an airport hangar, we’re trying to get ideas on how to better organize our own closets. The word is h-a-n-g-e-r. with an ‘e’. Just for future reference, so those weird people like me who can’t get past incorrect spelling can focus on the content of the article instead of itching to make it right.”

I was hangin’ out over at Yahoo! Style, reading about Parisian restaurants when I almost spit out my nonfat, sugar-free vanilla latte:

Did the writer think that the steak sits around in those Quonset hut-like shelters for planes? The hanger steak gets its name because it hangs from the diaphragm of the steer, not because it hangs out at an airport.

How do you hang an airport?

I should have stopped reading when I saw this photo caption at the top of an article on Yahoo! News‘ “The Ticket”:

Thinking the missing apostrophe might be a simple oversight, I made the mistake of reading the article. Dumb! I don’t know why anyone (including me) would believe a reporter who thinks this is a city in Florida:

It’s not; the city is Fort Myers. A journalist who doesn’t bother to Google the city to get its name right (or who doesn’t have an editor to do it for him) doesn’t inspire confidence. So, I was a bit skeptical when I read something about an airport hanger:

Is that a clothes hanger in an airport? Or something that hangs an airport, because if it is, I’d pay to see that. I wonder if it would also hang the airport’s hangar and all the planes stored inside it.

I continued reading and quickly stumbled. While vague, this sentence makes no sense to me:

Just in case you thought the reporter made a typographical error with the hanger banger, he repeats his choice of hanger:

I still don’t know how you hang an airport.

When did Lady Gaga change her position on “Don’t Ask, Don’t Tell”?

It seems that Lady Gaga has reversed her position concerning the repeal of “Don’t Ask, Don’t Tell.” At least that’s the case if you believe everything you read on Yahoo! News‘ “The Upshot.”

I’m likely to be skeptical of anything I read by a writer who confuses a hanger steak with a hangout for aircraft:

Whoa! When did that happen?

Normally I wouldn’t point out a minor typo, but when combined with the rest of the errors, it convinces me that I can’t believe everything I read on Yahoo!:

You don’t see this every day. Thank goodness

Here’s something you don’t see often — unless you’re a reader of Yahoo!:

Most people — excluding the writer for Yahoo! TV — know that a hangar is a building for storing aircraft.