Would that be Gump or Tucker?

Was the writer for Yahoo! Makers referring to Forrest Gump or Forrest Tucker?

Or was the writer just showing us that she has no idea how to spell forest, and she’s OK with that?

Whether you’re having fun pointing fingers at Yahoo! Makers writers or merely shaking your head in disbelief, things are bound to get silly when you read this:

I was reading an article on Yahoo! Makers when lo and behold, there was an incorrectly capitalized valentine (when you’re writing about a card, it’s a common noun) and a homophonic horror that’s become all-too-common on Yahoo!:

How to tell if you need a vacation

I think the writer for Yahoo! Makers needs a little vacation. Maybe just a little getaway to help her relax. Perhaps she’d spend a little time with a dictionary and learn to spell some common words and rid herself of her obsession with hyphens:

Do you remember anything?

Do you remember anything from third grade? If you’re this Yahoo! Makers writer, the answer would be, “not so much.” She apparently forgot how to form the plural of a noun (hint: it generally doesn’t include an apostrophe) and she forgot that valentine is not capitalized when you’re referring to a card:

How to write a simile

OK, I lied. This doesn’t illustrate how to write a simile. It illustrates how not to write one and it’s from Yahoo! Style:

Stop the baby talk and learn to write

I blame Rachael Ray for the rise in the use of the word sammie for what adults refer to as a sandwich. I blame ignorance for this Yahoo! Makers writer’s use of the apostrophe:

This professional writer has no idea what an apostrophe means when you put it at the beginning of a word. When dropped there, it indicates that one or more letters are missing. So, what does she think sammie is short for? Flotsammie? Jetsammie? Balsammie?

Turn off your brain

Turn off your brain and allow your imagination to fly free, and try to figure out what the heck this means on Yahoo! Makers:

Please tell me you’re not registered to vote

When I read this, written by the “managing editor” for Yahoo! Makers, I thought it was a little odd that the Donald Dump character would be holding a copy of the Declaration of Independence.

In fact, it was very odd. And very wrong.

Here’s the picture of Donald Dump and it looks like he’s holding something… what is it? It sure as heck ain’t the Declaration of Independence, which would make no sense, not even satirically. He’s holding the Constitution of the United States of America: 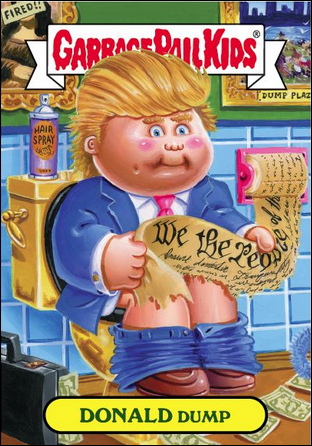 I can only hope that this “managing editor” isn’t typical of the electorate and that he’s not a registered voter.

This is no time for tact: The person over at Yahoo! Makers who’s responsible for this is a moron:

OK, that was harsh. But what do you call someone who is paid to write and yet can’t spell tousled or intact, and doesn’t use a spell-checker and apparently has no idea how to use an online dictionary?