Basic elementary school arithmetic has proven to be beyond the mastery of Yahoo! writers. Now we see that even writing a number is just too hard for one Yahoo! Style writer:

Who writes like that? Who speaks like that? First, if you have to spell out part of the number (and why would you?), at least use thousand and not thousands. (B) Every style guide I’ve ever seen dictates that numbers that large should be written using numerals, not words.

This excerpt from Yahoo! Sports would be perfect if fifty-two could just pick up a hyphen:

All two-part numbers (from twenty-one to ninety-nine) require a hyphen.

What do you do when you come up against a clash of styles? I’m not talking about wearing Birkenstocks with a prom gown, I’m talking about writing and trying to follow conflicting editorial guidelines. Case in point (or case and point, as one Yahoo! writer would say), this age on the Yahoo! front page:

If you follow Associated Press style, you’d use numerals (not words) for the age of a person. But AP style also recommends not starting a sentence with numerals (except if the numerals are a year). If you write out the age correctly, it would be: Forty-nine-year-old. That’s a lot of hyphens. And it would violate the rule requiring numerals for the age of a person. So that would be: 49-year-old. But numerals can’t go at the beginning of a sentence.

What to do? Recast the sentence, of course! You’ll get a shorter sentence that’s easier to read without all those hyphens:

Make no mistake: The writers for Yahoo! are not mathematical geniuses. Second-grade arithmetic eludes them. Basic geometry is beyond their understanding. And percentages confuse them. But I would have thought that they could at least count:

It really doesn’t matter, because I don’t trust a writer who manages to misspell Nielsen two ways. He’s creative, but not credible.

From an A to an F

We here at Terribly Write award the writer and/or editor for the Yahoo! front page a big fat A for correctly hyphenating 190-square-foot apartment. However, the hyphens in 190-sq-ft home knock the overall grade down to a big fat F:

A professional writer or editor should know that a number followed by an abbreviation is always unhyphenated.

That’s the way this opening on Yahoo! Movies should have been punctuated if you’re an old-school punctuationist:

That’s not the only punctuation problem in this excerpt: There’s the period outside the quotation marks (in the U.S., it goes before the closing quote) and the missing hyphen in 23-year-old. And while we’re talking errors, how about that extra word in “attended to”? Don Johnson and Melanie Griffith attended the premiere of “Don Johnson.” I wonder if it’s anything like the recently premiered “Don Jon.”

3 signs you’re in the wrong job

If you’re an editor for Yahoo! Shine, you may be in the wrong job. Here are just three signs from the Shine home page that should have you considering a career change.

The first sign that perhaps you’re not cut out for writing or editing is your inability to match a verb with its subject:

Another sign that should have you questioning your role: You think this is how to show the decade known as the ’80s:

And the third sign you’re in the wrong job? You can’t tell the difference between a possessive pronoun (like your, meaning “belonging to you”) and a contraction (like you’re, meaning “you are”):

Selena Gomez’s underage drinking gets out of hand!

Just when did Selena Gomez start drinking so heavily that she ended up with a hangover? Apparently it was on her 20th birthday, if you believe Yahoo! omg!: 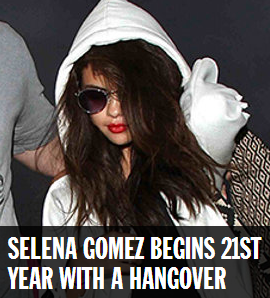 Of course, if you believe anything you read by a Yahoo! staffer, you’re naive or gullible. Or you just haven’t been reading Terribly Write. The truth: Ms. Gomez just turned 21. That means she is starting her 22nd year, not her 21st. Yahoo! writers have never been good at basic arithmetic.

Endeavour to spell it correctly

In an article about former astronaut Mae Jemison, the Yahoo! Shine writer manages to misspell her name. But that’s not the only word she has trouble spelling:

Jemison served in the Peace Corps (corp is an abbreviation for corporation). She is an African American (which is spelled — this time — sans hyphen). She was a science mission specialist (which doesn’t require capital letters) on the Endeavour (a spelling that is more common in Great Britain than in the U.S.).

Apparently the writer thinks she knows how to spell the name of the shuttle, because she misspelled it again. I guess we shouldn’t expect her to notice a missing word, or to be consistent about writing African American (this time she’s hyphenated it), or realize that astronaut program isn’t a proper noun:

Perhaps that’s the best she can do. Perhaps she brought all her talents to bear and still produced content that would embarrass the editor of a high school newspaper:

So, she doesn’t know when to use bare and when to use bear. No biggie. A lot of people have that problem (especially if they write for Yahoo!). But couldn’t she see the double will? Couldn’t she try to be consistent? (Now astronaut program is devoid of capitals.) The rest of that paragraph is a real mystery to me. Grammatically speaking, she doesn’t seem able to match a verb (which should be exist) with its subject (which is capabilities). And most house styles would recommend that a number greater than nine be written in numerals. But I quibble.